Among all the issues and uncertainties that are top-of-mind for high income earners and high-net-worth individuals these days (not to mention the accountants, attorneys, and advisors who serve them), a key concern is the possibility of higher taxes if Biden wins the presidential election and the Democrats reclaim a Senate majority. Among other things, Biden’s tax proposal includes:

These proposals have stirred up some concern and consternation among those with high incomes and sizable estates, and the threat of higher taxes certainly warrants careful planning. Indeed, even if Trump is re-elected, many of the TCJA’s tax cuts are set to expire at the end of 2025, so the question is not if but when to plan for these impending tax increases.

However, rather than delve into specific techniques and strategies in this article (which I would be happy to discuss independently), I thought it would be worthwhile to review a little bit of tax bracket history.

Let’s start with a fact that may come as a surprise to many readers: from 1932-1981, the top marginal tax rate for U.S. taxpayers was never less than 60%. Moreover, from the late 1930s to the early 1960s, the top tax bracket hovered between 80-94%...more than double the current rate! It wasn’t until the Reagan administration passed the seminal Tax Reform Act of 1986 that the top rate dropped to 38.5%, which has held fairly steady ever since.

Now I dislike paying taxes as much as the next guy, and an important part of my job is helping clients find tax savings opportunities. Still, no one can deny that tax and wealth transfer conditions are just about as good as they've ever been, or that even Biden’s proposal seems tame compared to the tax regimes of much of the twentieth century. That may not take away the sting of paying an extra 2.6% (15% when you include the proposed Social Security taxes on income above $400,000), but at least things aren’t as “bad” as they used to be.

And, lest you think that those ludicrously high tax rates must have been an impediment to growth, I would also like to highlight the fact that the economy forged ahead, innovation flourished, and the stock market continued to grow and create enormous amounts of wealth. To illustrate this point, I charted the top marginal tax rate from 1928-2020 and overlaid the growth of the S&P 500 during that same time frame. As you can see, marginal tax rates had little to no impact on long-term market appreciation. 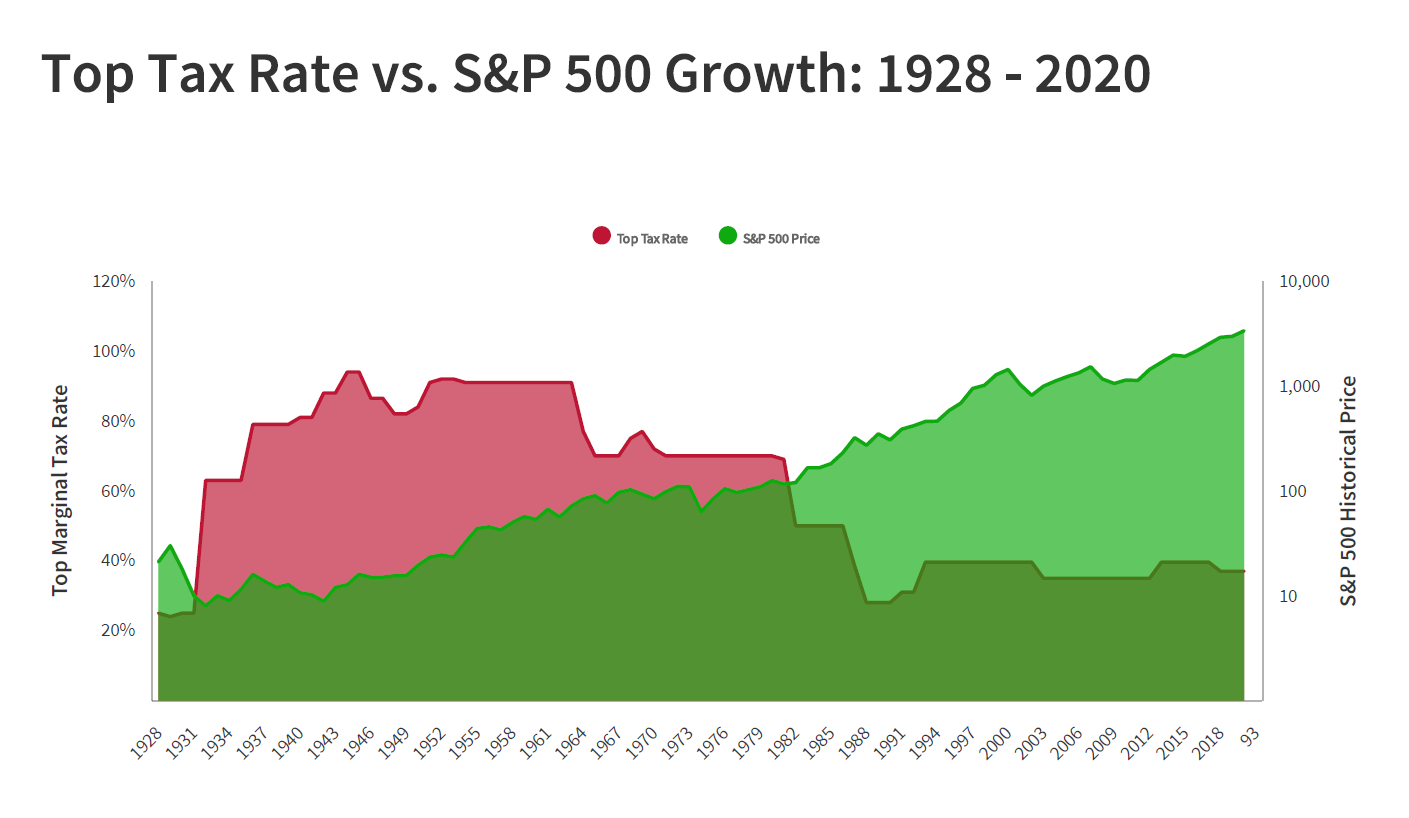 Personally, I'm not in favor of higher taxes - for myself, my clients, or anyone else. But I'm not a policymaker, I just study policy decisions, and the bottom line is this: we are living in a tax law golden age right now, with lower rates and higher exemption amounts than any other time in the last 100+ years. Therefore, I would encourage you to focus on how good things are now (and take advantage!) rather than on how bad things will be when tax rates go up. And they will, whether in 2021 or 2026, so plan accordingly.

And Now For Something Completely Different...

Why don't we have flying cars yet?