All happy families are alike; each unhappy family is unhappy in its own way. – Leo Tolstoy, Anna Karenina

Making money is hard. Keeping it is harder, and keeping it in the family across future generations is harder still.

Part of the problem is basic math. Take the example of a successful wealth creator with two kids and four grandchildren. For simplicity’s sake, assume that the money neither grows nor gets spent as it passes to each successive generation. The table below illustrates the result: 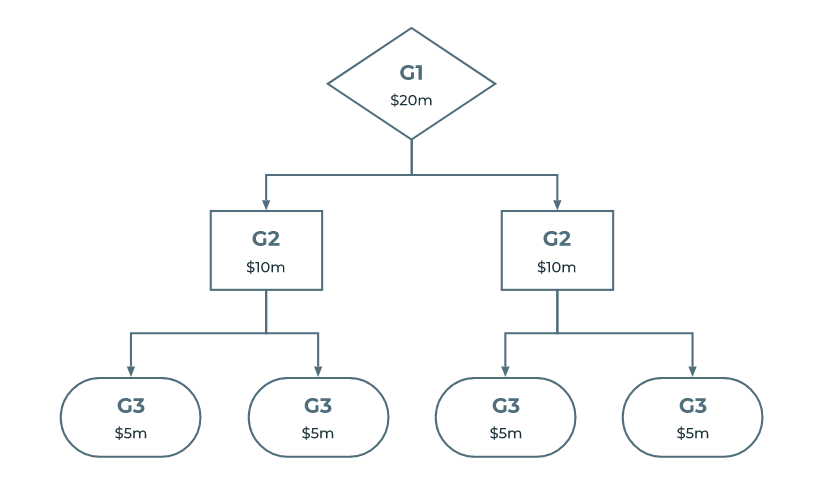 As you can see, by the third generation, the level of wealth per capita has been diminished by 75%.

But the challenges extend far beyond mathematics. They even extend beyond tax and estate planning. In fact, according to research by the Williams Group, only 5% of wealth transfer failures are attributable to inadequate technical planning (estate planning, taxes, etc.). The overwhelming majority of wealth transfer failures are due to the following factors:

You’ll notice that these issues are far more qualitative than quantitative: they can’t be solved with a financial calculator or a thick stack of legal documents, but instead must be addressed with intentional communication and connection.

The sad fact is that most wealth creators are terrified about the impact that their money will have on their kids, and most heirs experience their inheritance as a burden. What’s needed on both sides is a shift in perspective: viewing the wealth as a generative source of opportunity rather than an oppressive source of guilt, or an avenue for irresponsibility. This can only be accomplished when the topic of money is deliberately discussed, rather than treated as taboo. Instead of being kept in the dark, the rising generation(s) must be included, educated, and empowered.

This is easier said than done, of course (remember those statistics?). Every family has its degrees of dysfunction, and as Tolstoy once wrote, each unhappy family is unhappy in its own way. Therefore, each family will have its own unique problems to solve, and that problem-solving process might look different for each family. The important thing is simply to avoid waiting until it’s too late. Whether you are a first-generation wealth creator or a second- or third-generation family member, don’t be afraid to start the conversation; just make sure you have the proper resources and a plan in place to move the discussion in a positive, productive direction. Focus on identifying and codifying shared family values to serve as guardrails and signposts on the journey. And make sure every voice gets heard.

At the opening of this article, I commented on the difficulty of making, and keeping, wealth. However, monetary wealth, on its own, isn’t really worth making or keeping. Divorced from values, it can actually be an insidious, destructive force. What makes financial capital worthwhile is its utility to support and enhance the human, intellectual, social, physical, and spiritual capital of others (within and beyond the family). Thus, I would encourage you to adopt a more holistic view of wealth and capital when you engage in these discussions.

For further reading on this topic, be sure to pick up Intentional Wealth, by Courtney Pullen, and Entrusted, by David York and Andrew Howell.

And Now For Something Completely Different…

The story of how London Bridge ended up in Arizona.