For decades, the IPO (initial public offering) has stood as the gateway to the public markets for big private companies seeking access to more capital. This year, however, there have been some noteworthy exceptions – companies such as Palantir, Draft Kings, and Nikola – who have elected to bypass the traditional IPO route in favor of alternative methods such as direct listings and SPACs (special purpose acquisition companies).

The surge in SPACs, otherwise known as “blank check companies,” has been especially significant, both in terms of money raised and buzz generated. As a quick overview, a SPAC is a shell company that raises money through an IPO, then shops around to acquire a privately held company. Once a target company has been identified and the deal terms have been agreed upon, the two companies merge to become a new, publicly traded company.

For a quick glimpse at just how much capital SPACs have raised in 2020 relative to the past five years, take a look at the chart below: 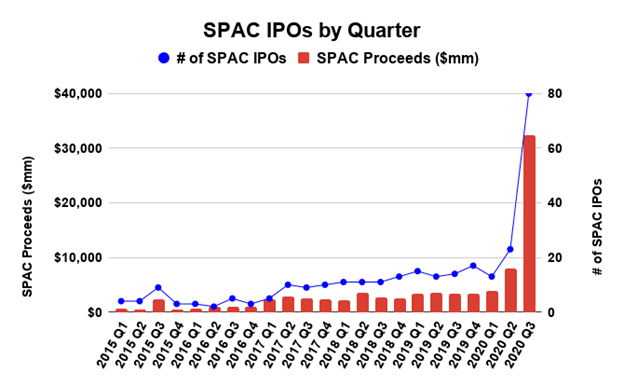 The appeal of this strategy from a deal-making perspective is relatively straightforward: it allows the owners of the SPAC to raise a lot of capital, and it allows the owners of the business being acquired to avoid much of the regulatory rigmarole associated with a traditional IPO. Since the world has been so disrupted and the market so volatile this year, the relative efficiency and pricing certainty of SPACs has increased their popularity. And, whereas public opinion of SPACs has historically been quite skeptical, the involvement of high-profile investors such as venture capitalist Chamath Palihapitiya and hedge fund manager Bill Ackman has helped boost their credibility. Heck, even Shaq has a SPAC!

Additionally, SPAC mergers in exciting-but-unproven industries such as electric vehicles and space tourism have given adrenaline-seeking investors a shot in the arm. Companies like Virgin Galactic and Momentus are, quite literally, putting the S-P-A-C in space.

Still, despite all the fanfare and excitement, the historical returns on SPACs have been mediocre at best. According to Renaissance Capital:

Of course, if the SPAC trend continues to grow the way that it has in 2020, there will be a much larger universe of these companies to judge and analyze in the years to come. To date, however, the investment story so far has been far from compelling.

You probably won’t be surprised, then, to hear me say that investors ought to proceed with caution. I would liken SPACs to public market VC proxies. The companies being acquired aren’t yet profitable, though in many cases, the growth potential is significant. If you’re at all tempted to go for a moonshot in your portfolio and invest in SPACs, do your due diligence first. As always, be mindful of your overall allocation, and remember: with the possibility of great reward comes great risk.

And Now For Something Completely Different...

This kid is insane.